As a teenager in the 60s, trying to absorb as much jazz as possible, I stumbled on Lambert, Hendricks & Bavan, having just missed Lambert, Hendricks and Ross.  A trip to Sam's on Yonge yielded "Swingin' Till The Girls Come Home", which almost put me into receivership when combined with a triple Charlie Parker boxed set (who knew there were such things) of live recordings (done in a phone booth) with Dizzy, Miles and sometimes Fats Navarro.  The L,H & B was a delete, a concept that I didn't fully understand but came to rely upon as the decade wore on.

After the frenetic Bird tracks, L H & B sounded positively restrained. And because I had heard many of the originals, I understood right away what Hendricks was trying to accomplish.  I didn't really notice that the singers were all different colours until years later when a piano player I was working with said, "Dave Lambert was pretty earthy for a white guy." I did a double-take.  And a Sri Lankan alto/soprano? The only one in the jazz business, she did a great job - as highlighted on the archival video of their Ralph Gleason "Jazz Casual" appearance.

Recently we acquired an excellent 1987 tape re-release of this iconic album.  The liner notes by Yvonne Tost Ervin (a University of Arizona Journalism graduate and jazz activist) are superb, providing historic context, personnel details and musical analysiswith style and understanding, Here is an excerpt:

Hendricks penned most of the lyrics for the group, and his first undertaking was formidable: an album of lyrics set to Count Basie Band arrangements. From ensemble sections to solos, "Sing a Song of Basie" took many hours of overdubbing. This, in contrast, is a collection of live  recordings—no overdubbing, no alternate takes—which tested the group and showed its true spirit and talent.  The opening eight selections are from the first "in performance" album Lambert, Hendricks and Bavan (or Ross) had recorded. The date was in New York at Basin Street East in September 1962 with the trio's regular accompanying group of Gildo Mahones (piano), George Tucker (bass), Jimmie Smith (drums) and Pony Poindexter (soprano saxophone).  The opening tune, a vocalese version of Basie's 1937 recording of One O'Clock Jump, was not on the original  release. One listen to both the Basie and the vocal versions and it is evident what vocalese is all about. Yolande Bavan sings Basie's piano solo, followed by Hendricks on tenorman Herschel Evans' solo, Lambert imitating George Hunt's trombone improvisation, Lester Young's tenor vocalized by Hendricks and Buck  Clayton's trumpet by Lambert. The soloing is followed by ensemble riffs, with Hendricks handling the sax section, Lambert on trombones and Bavan hitting the high notes in the trumpet section.

For me, things really get in gear on side two with the arrival of Clark Terry & Coleman Hawkins.  These seasoned virtuosi display all the qualities that one expects from jazz giants - empathy, vitality, creativity and poise - not to mention total mastery of their instruments, the material and the idiom.  Ms. Ervin has a similar take:

The next four selections, including GimmeThatWine,are from the famed Newport Jazz Festival, back when it was still held at Newport.  The very special guests areClark Terry and Coleman Hawkins, who are alsoparticipating in the festivities. One of the highlights from this session is Watermelon Man, written by Herbie Hancock, then rising to fame as Miles Davis' pianist, on which Hawkins plays a solo that is idiomatically perfect for this contemporary, earthy blues, demonstrating the versatility and adaptability of this legendary tenorman who was playing with Fletcher Henderson 40 years earlier.

And her summary of the album's last track wraps up "Swingin' Till The Girls Come Home" with a flourish:

The vocal highlight of this session is Cloudburst, where, on a solo originally improvised by saxophonist Sam the Man Taylor, Hendricks intones 40 lines in 48 seconds. In his four and one-half star Down Beat review of the original album, John A. Tynan called Cloudburst "one of the most exciting routines the trio has ever done. The three carry off the tour de force with such cheek and dash," he wrote, "as to leave one shaking his head at the virtuosity and talent."

The original LP was released 57 years ago.  Dave Lambert died in 1966, Jon Hendricks in 2017. Yolanda Bavan is mercifully still with us.  And for anyone who needs reassurance that the human voice has a place in jazz, try this one out! 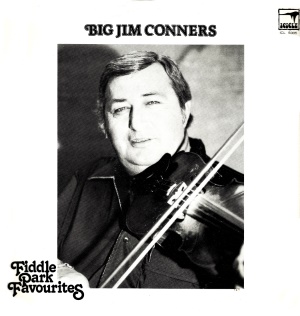 Originally from Strathcona, Ontario, Big Jim Conners (1932 - 2009) was a respected fiddler across the province and beyond. In his prime, he appeared on local radio and television broadcasts in Cobourg, Pembroke and Barrie. He was a familiar competitor in the great fiddle contests of Shelburne, Bobcaygeon, Perth and Pembroke and a popular performer everywhere he appeared. The great Halifax fiddler Gordon Stobbe wrote, "Crisp, clean playing, interesting twists in phrasing, a smooth and effortless bow hand and an endless repertoire of great tunes introduced me to Jim Conners, Big Jim to his friends...Here was a fiddler to inspire me."

The album Fiddle Park Favourites shows Big Jim in his comfort zone - the repertoire that would be played in the campground jams at a fiddle contest. The big half-Mohwak fiddler, an orphan at 4 and raised by his grandparents, was a virtuoso in this field. "He never learned to read music, but was self taught on his grandfather's fiddle, before buying his own 1890's Collin-Mezzin violin off a bootlegger in 1955." 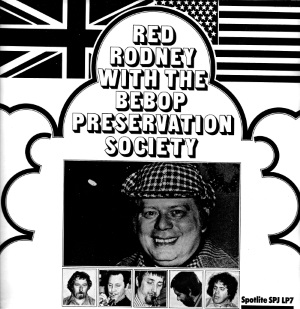 We recently acquired a brilliant British Spotlight release from 1975 - "Red Rodney with the Bebop Preservation Society".  The liner notes by Brian Davis are jammed with that stuff that we don't see very often in this century: real information. Here's a big excerpt:

"1974 brought two important visitors to these shores - Al Haig and Red Rodney. Although Al's European trip unfortunately did not include any English dates the reverse was the case with Red Rodney and enthusiasts had ample opportunity to catch Red gigging in and around the London area. Both artists were naturally recorded by Spotlite, Al in a trio setting (see SPJ AH4 "lnvitation" - his first record since the obscure Mint album recorded in 1965) and Red in the company of the musicians present on the enclosed record. Red was the subject in one of Mark Gardner's most revealing interviews in the April 1970 issue of the late Jazz Monthly. Red spoke frankly of his trials and tribulations and during the correspondence involved Mark and Red struck up a strong mutual friendship. Naturally when there was a two-day break in the European schedule of the package tour inappropriately named “A Tribute to Charlie Parker“ Red whipped across to London for a couple of days and immediately got in touch with Mark. l was fortunate enough to spend a memorable social evening with Red, who is surely the youngest looking 48 in the business, incredibly fit, friendly, obviously appreciative of the interest shown in him, but best of all, still raring to playl A week later (14th November '74) he was back and the grapevine said he would be sitting in at the “Seven Dials" named after a nearby seven-piece road junction in the heart of London's West End. Situated at 27 Shelton Street a narrow warehouse type thoroughfare immediately behind the real Covent Garden the club offers jazz of all persuasions and is one of a number of clubs run by the highly successful London Jazz Centre Society.  Sure enough Red sat in with, appropriately, the Bebop Preservation Society, much to the delight and admiration of all. ln the audience was Tony Williams who just knew that this meeting of kindredspirits had to be recorded — and so we come full circle. Now for a few facts about Red and the personnel of the BPS...

Published in The Captain's Blog
Be the first to comment!
Read more...